There I was, feeling a little lost back at the entrance to Bloodroot Mountain Trail. I thought, how did everyone disappear so fast? I tried to keep my cool. There were two people in front of me just a minute ago, they couldn’t have gone far, I thought,  reassuring myself. I decided to investigate the route that Junyong Pak took earlier. Perhaps he was right after all, perhaps that was the correct route to take. I started to climb up the mountain. Still carrying my rock, I could feel my heart begin to race. I decided to stop, and instead of wasting time searching for my fellow racers with no real sense of which route to take, I opted to use the best tool I could think of in this situation, my rape whistle! Just kidding, but it was a survival whistle. There I was at be beginning of Bloodroot, surrounded by towering trees, barely able to see the crystal clear, starry sky above. Finally, I found my survival kit. I hastily opened it and retrieved my survival whistle. Since so little time had passed since I last saw a person (maybe ten to fifteen minutes at most) I was confident someone would be close enough to hear the whistle. No matter how many times I made that whistle echo through the woods, I heard nothing in return. I turned my headlamp off to search for any bobbing lights in the distance. Nothing. I set my headlamp to flash and started scanning the horizon in hopes someone would either hear the sound of the survival whistle, or at the very least, see the flashing of my headlamp. Still nothing. I couldn’t waste any more time. 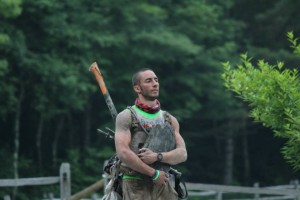 Once my bag was packed, I secured it to my back once again and I tossed my rock aside. It was slowing me down and it was far more important for me to find the correct route. I assured myself this wasn’t cheating; I planned to pick another sizable rock up again as soon as I was back on track. Thankfully, the mountainside has an abundance of shale rock. I ran back towards the intersection where the group of us struggled to decide what route to take previously. As I ran back down the right path, I finally saw someone running toward me. It was one of the Race Directors, Norm Koch, relief entirely overcame me. I told him I couldn’t figure out where everyone went after I tied my shoe and he told me to hurry behind him and he’d show me the route.

We ran back down the path a little and we came up on this pink ribbon, which appeared to be placed in a manner suggesting this path was a blocked off. I realized that wasn’t the case when Norm climbed over the pink ribbon and started to climb up the mountain. It’s no wonder why I struggled to find the correct route to take. The path was hidden, it was blocked off. The path didn’t shout out and say, “Hey, take this path.” I laughed to myself and thought, another great way to mess with our heads, nice.

As it turned out, Norm is an exceptionally fast and efficient hiker; he moves up and down these mountains with ease and impressive speed. He should be fast, though, he lived in the area and hiked the mountains all the time. I tried to keep up with him but found myself trailing further and further behind with each step. Not only was Norm used to climbing up and down these mountains on a daily basis but there was no pack weighing him down either. He was cruising. I did my best to keep up with his pace until the gap grew at an exponential rate and I had to call out for him to slow down a bit. He continued moving at his pace. It is the Death Race, after all. Of course he wouldn’t put on the brakes for me.

I felt relieved that he never pulled too far ahead of me. After about ten minutes of climbing we reached a road where a group of racers were waiting by a truck. It seemed they too were off the path and were directed to wait there for Norm to come lead the way. It was clear I didn’t have a rock at this point. I feared someone would call me out for it. Naturally, I made an effort to blend into the darkness while I searched the road for something suitable to pick up and carry once again. I did not feel good about being rock-less. Guilt was finding its way into my mind. I knew dropping that rock when I did was the right choice, so I just told myself to keep looking. I assured myself, you’ll find something. And find something I did. Not even a quarter mile later I found myself back at it trying to figure out a way to fashion a harness on the front of my pack for my new best friend, the new rock. At this point my pelvis already felt bruised from the poor decision I made to use my waist belt as part of the holster for my first rock. The importance of finding a solution that wouldn’t add to the collection of cuts and bruises this challenge had already left me with was rising. When this challenge began I had thought I was a genius. I thought the combination of bungee cords and compression straps would be the ultimate solution to secure this rock nice and tight to my pack. That was not the case, the faster I moved the more the bungees gave, the more the rock would wiggle its way out, and the more frustrated I became. I had to stop at least four or five times just to readjust my straps and reattach the rock. The frustration was starting to poke at me like a five year old who wants you to look at something. It took everything in me not to let that frustration get the best of me.

Eventually our little group hit a well-marked section and we were all on our own. I remember taking off on my own for a bit up the mountain pushing myself and trying to shake the delirium that was beginning to settle in. Bloodroot Mountain is one of the toughest climbs I’ve ever been on. It’s even more twisted and challenging when you are climbing while the moon is out and having not slept in over 40-something hours. With each step I began to question whether or not my eyes deceived me. Looking to the left, I saw what appeared to be a racer. As I began to get closer I was certain this racer was rocking back and forth. Were they cold? Is it possible the rain from earlier caused this racer to become hypothermic, I thought to myself. As I approached I closed my eyes and shook my head. When I reopened them all I saw were some branches swaying in the air. These were the dark moments of this race. I found myself questioning what was real and what was just a mirage from the delirium that takes over after being up for nearly two days straight drinking 5-Hour Energy shots every ten or so hours. Some of the things I would convince myself were there even if it made absolutely zero sense, but it was hilarious.. Without question I saw a chicken run across the path ahead of me; again an illusion from the branches blowing in the wind. Not knowing what was really there was pretty trippy; even if the illusions only lasted a few seconds it’s worthy to note that I wasn’t always in a stable frame of mind. 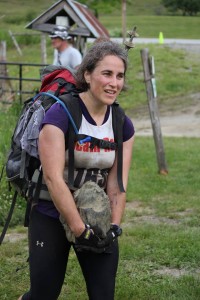 This is what makes the Death Race such an extraordinary challenge to overcome, not only do you push your body to its absolute max but you are also testing the strength and endurance of your mind. Can you stay awake? Can you make the right decisions on little to no rest? Can you push your mind to keep going when your body starts to cry, only wanting to quit? The Death Race is ultimately a test of the mind, everything else is just there to make it suck even more. But those who endure, those are the ones who know success.

Along the hike I bumped into my friend Jane Coffey a few times and I expressed to her how I was feeling a little off with all the things I was seeing. At the same time I was running low on water and I recalled back to the previous year during the 2012 Death Race when Andy drank from one of the streams and told us this was his norm. I figured what the hell and filled my hydration unit up in one of the cleanest, clearest streams I could find. We also met up with one of the most incredible athletes I’ve had the pleasure of meeting. She was wicked fast, and relentless. Amy Palermo Winters was crushing this mountain. I couldn’t help but wonder how her prosthetic leg handled some of this mucky terrain they had us trudging through. Like I said, she was relentless.

My mind was entirely focused on reaching the peak of this climb. The climbs always take their toll on me. I knew once I reached the summit it would be all downhill from there. Literally. I was more than ready to reach the Chittenden Reservoir. Even if it meant we had to swim. As the descent continued I was cruising down the mountain, through some swampy areas and making killer time up for how slow I was on that treacherous ascent. During the climb down I ran into Mark Webb; I was so happy to see him. 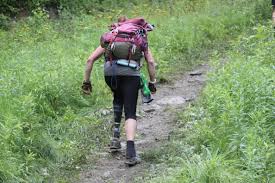 As I remember a group of about four of us all converged at a road and had to turn around and take another route that was marked just a bit up the mountain we had just came down. I thought I had seen the worst of the sloppy muddy marshes on the mountain, but they were nothing compared to what came next. I was shocked my shoes weren’t sucked into the abyss. The sun was finally starting to rise. It felt like we had been on Bloodroot forever. I kept seeing houses off in the distance but apparently those weren’t real either! What the hell is real anymore? I kept thinking we just had to be close to the reservoir by now. I wasn’t feeling good anymore. The food I was eating was starting to get to me. It kind of came at me all at once. My head began to hurt, my stomach uneasy, I could feel my throat swelling up. Why am I getting sick now? Is this flu sick? Am I going to be able to finish? What the hell is happening to me? I felt horrendous. Barrrfff!!