Two weeks after contracting the now infamous Spartan Rash I was back out for another Spartan Race in Washougal, WA. Why would I go back to a Spartan Race after suffering from super-itchy-itis for two whole weeks? Because that’s what you do. This sport is bound to cause some wounds, I have more scars than ever, and each one tells a story. Just like this crazy rash we all contracted has become a big story. I went to another race because this is what living is all about. I welcome any and all obstacles when I sign that waiver before I enter the battle ground. No rash, cut, bump, bruise, torn shoulder (cough, cough), will stop me from coming back for more. 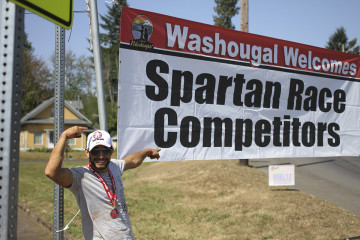 Enough about that, onto the fun stuff. A race in the great Pacific Northwest. I have been wanting to visit the PAC NW for quite some time now. Flying into Portland, OR I met up with Spartan Pro Athlete, Corinne Kohlen and we set off to a small hotel in Washougal, WA about 25 minutes away from the airport and another 15 or so from the venue. The morning of the race came quick after getting little sleep thanks to some creaky floors and lots of movement in the room above. Not happy.

Once we arrived at the race venue, set at a Motocross Park, happiness returned. I was in my element. Being on the race site is the ultimate feeling. I love the energy, the motivation, the friendliness and the competitiveness. You can see people coming together from all over the country and then as it often happens you have the locals that blow all the normal competition away. Being that this was the Sprint Championships, Midwest marked the Super Championships, with everything culminating next month in Vermont at the World Championships at Killington Peak in the form of the Beast with the Ultra Beast happening on Sunday. Given that, the competition was even more ferocious than in it just was at Midwest. 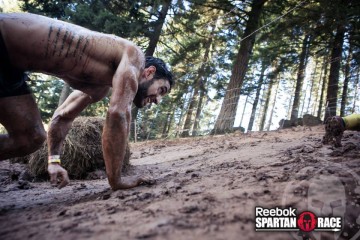 The course was impressive, starting off with a very steep incline that lasted for what seemed to be an eternity. In the Men’s Elite Heat it was an all out charge to the top. To me it felt like I was pushing too hard too soon but I didn’t want to fall too far behind that early on in the race. I foolishly charged forward at full speed. The following day I remembered to run my own race and took the beginning section easier, giving me more gas to push through the entire race. It was a good lesson. For the remainder of the course it was a lot of up and down with some very rocky downhills that were difficult to unleash on at 100%. I found myself moving sideways on a few of them just to prevent slipping. 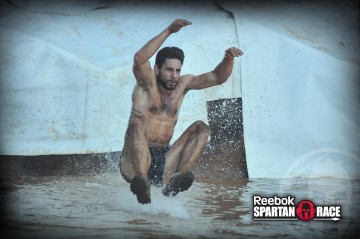 One of the best obstacles at this course was the uphill barbwire crawl. It was gnarly. The height of the barbwire was high enough to give me an edge here and both days I was able to pass 2-4 people during this upward crawl. Flexibility is a huge bonus in the barbwire crawls. The entire course was very intense and catered to those with a tremendous amount of strength. Heavy tire flips, heavy tire pulls, lots of intense uphill and downhill. The layout for this course, the obstacle spacing, everything was pretty damn spot on. Plus, there was a freaking super wicked fast s I’ve done more Sprints this year than any other type of race, I can say this was definitely one of the most fun and challenging of them all.

The race ended with a pretty wicked series of obstacles that really pushed your limits. Coming down the hill you hit one last barbwire crawl followed by a series of motocross rollings hills and banked turns. That then led to the rolling mud pits, followed immediately by the rope climb. They got you nice and muddy just to add to the challenge. The rope climb mud pit was fairly deep making it guaranteed to come out wet and and muddy perfect for the next obstacle, the most dreaded, the spear throw. Day one I hit the hay bales all the way to the left and somehow the spear stuck and didn’t fly all the way through like it has many times before. I was ecstatic and didn’t stick around long enough to give it a chance to fall. Day 2 I would miss the spear throw right behind Robert Coble, I had to beast through my burpees to get the lead on Robert and almost catch my “twin” Joe Kauder. 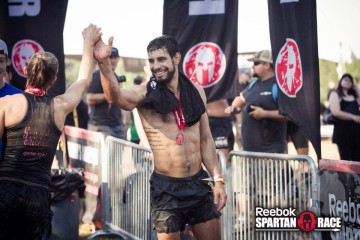 Next up after the spear throw was the traverse wall, hands still slightly muddy and a mess. I would have to take this nice and slowly to avoid falling off. The second day it was even more crucial to take this slowly after missing the spear. Immediately following the traverse wall was the tire drag and of course I grabbed one of the heaviest, I swear the appearance is a complete deception of what you’re actually getting yourself into. Regardless this series of obstacles was demanding and gave me a continued advantage, after this one more barbwire crawl followed by a slippery wall climb and it was home free and time to battle with the gladiators. Sadly, there was no fire for me to do my front flip over, apparently there was a fire ban in effect due to dryness. I charged at the gladiators and shouted out the most d-bag phrase I could think of, “come at me bro.” An exciting end to an incredible event. Both days were very interesting and rewarding as all Spartan Races tend to be. This race continues to leave me with the happiest moments and fragments of time. Each race leaves me with a lesson and something to look forward to.

Spartan Race has a Pro Team and a group of Elite racers that are dedicated to improving the sport and sharing the knowledge we’ve gained through our experience with anyone who wants to learn and avoid the dreaded burpee penalty. Recently we’ve been trying to host clinics like the Traverse Wall Challenge clinic. We help show our techniques and most times there is more than one right way to do it, it’s a matter of figuring out what works best for you. The Spartan Pro Team has also started filming tutorial videos of how to do all the obstacles so keep your eyes on the Spartan Pro Team Facebook page for videos and team updates. 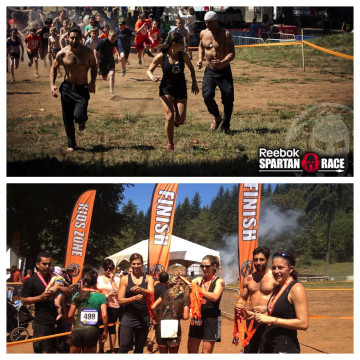 I know we’ve been here before recently but I can’t help but bring the Kids Race up again. This has become without question one of my favorite parts about the whole weekend. Participating in the Spartan Jr Kids Race is such a blast. I love rabbiting (leading the top kid through the course), turtling (making sure every kid crosses that finish line), it brings so much joy seeing those young obstacle racers smiling up at you as you present them with their medal and congratulate them for being a Spartan. It’s pretty special, who knows maybe some day I’ll have my own little Spartans.

Sometimes after a race is nearing its end on Sunday I like to go out and just play on all the obstacles. Practice my spear throws 20, 30, 50 times. Drag a few tires, Climb a muddy traverse wall, swing on the ropes like Donkey Kong, Spartan Race is a big kids playground, and I’m the kid that never wants to leave. Expect this type of child’s play to only get worse the more often I go to any racing event. I love this sport.