Just a week prior to the 2013 Spartan Death Race – Year of the Gambler, I was being trained to be a Spartan Group X Trainer, had the trip of a life time to California – my first time ever (I was there once before but only for a day trip to Magic Mountain) traveling up and down the coast from San Diego to San Luis Obispo and back. To top it all off I finally had a shot at a purely obstacles only race at the Alpha Warrior course in San Diego where at long last I stood on my first OCR podium. Coming off the trip I was beyond ecstatic but as I flew back from San Diego the Monday night before the Death Race the nerves began to trigger a slight bit of anxiety within. Before leaving on my trip I had already packed most of the necessities for the Death Race, when I returned I would only have a few things to gather, or so I thought. My flight from San Diego to Chicago’s O’Hare International Airport arrived at 11:59PM on Monday, I was to fly out to Manchester, NH Wednesday at 6:00AM from O’Hare arriving 1:34PM, Cleveland layover = nap-time! Talk about cutting things close. Packing was a nightmare. 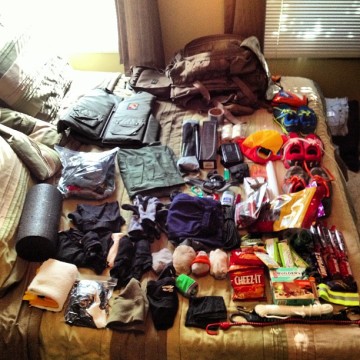 To my luck, my pops – the dude who has always been there for me in everything I do – found someone to give my beloved Fiskars x27 Axe a very nice sharpening. just days before I returned from San Diego. Gathering my gear and some of the shopping frenzy that took place on Tuesday was extremely chaotic but made the race feel like it had already begun, enjoyment and happy smiles were in full effect even though my mind was traveling faster than Ferrari on the Autobahn and at times I felt like I was going to forget all the essentials in my haste. I kept reminding myself that 90% of what I needed was packed and that this last 10% was always going to happen the days leading up to the Death Race, it’s just the nature of it. After Mark Webb picked me up from the airport we did even more shopping for food and other items we needed for the race such as grass seed, food and hydration, hand shovel, compression sack, Colgate Wisps (such a key item to have after being out there over 24 hours getting all kinds of nasty mouth), you know important stuff that’s best bought once you are on the way to the Pittsfield, VT area to minimize travel weight. 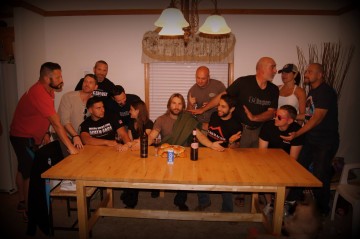 Once again Mark and I would be heading to the Death Race together. My favorite part about this race is seeing, being and racing with all the incredible people I have become friends with over the past couple of years. Truly inspiring individuals to be with, it brings tremendous happiness to my life. We checked into the Hill Side Inn located in Killington, VT Thursday evening just before the race. That evening we ventured close to Pittsfield for what has become the traditional “Last Supper” hosted by Team SISU. The last time I was at the “Last Supper” at the Winter Death Race earlier in the year, I wasn’t even in post surgery physical therapy yet. This time was much more enjoyable, I didn’t have to protect my shoulder constantly. It was great catching up with everyone that was there including my teammates from the Corn Fed Spartans.

After dinner Mark and I headed back for an early night at the hotel. We were to be at registration by 9:00AM at the latest Friday morning. We discussed it back and fourth and eventually concluded that we would head out try to drop our gear at Amee Farm and then head to the Original General Store, grab some breakfast. What happened instead is we pulled up and were not allowed into Amee Farm for our gear drop. I could see in the distance Amelie Boone doing exactly what Mark and I had requested to so this mildly irked me during our breakfast. I kept breakfast simple and stuck to granola, yogurt and fruit.

After we finished and had time to connect with other friends and racers Mark and I gave our attempt to gear drop at Amee another go around and this time we succeeded. We showed the “parking security” volunteer the email pointing out that we could indeed drop our gear anytime after 5:00AM at Amee and he agreed to allow us. As we unpacked a Staff member appeared and the mind games began. He kept trying to go on and on that we were incredibly late for registration and that we’d never make it in time to begin. Both Mark and I kept doing what we needed to unload his vehicle and secure our location in the gear tent not letting his incessant “you’ll never make it” talk disturb us. It always cracks me up how hard the staff and volunteers try to make someone drop. Then it was off to the Riverside Farm to park Mark’s vehicle, drop off our identification and another valuable item (I used my old DePaul Student ID and Driver’s License).

When we pulled up we were next to the Corn Fed Spartans, my teammates and support. Jonathan Nolan and TJ Nomeland looked ready to go, uncertainty about when to start showed in their eyes. We waited until almost 8:30PM to register, knowing from the email that it was from 6:00AM until 9:00AM. It’s one of those things many of the veterans now know that the first timers usually don’t, the sooner you show up the sooner you go to work and it doesn’t stop until the Race Directors say you finished or you pull yourself from the course. The more you do the sooner and more likely you are to overwork yourself and DNF. It’s just the facts. That’s Death Race. There is a balance to find in playing the game. After all this year we were Gambling.  Up until the race I was uncertain how gambling would play into the race, but it was all starting to make sense. Everything you do in the race, the choices you make, the food you eat, the shoes you wear, it’s all a gamble. Completing a challenge, knowing you completed it, that’s a gamble. We were gambling with when to register and when we would choose to begin the race. 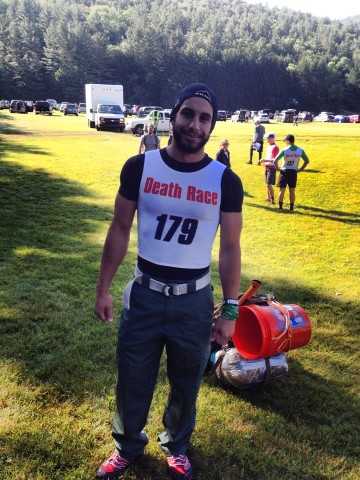 We started at 9:00AM and the first place we were sent to was Andy’s new home. On the way we had a checkpoint that involved taking out our hand snips and trimming some foliage. Typical Death Race landscaping right off the bat. Hilarious if you ask me. When I tried to get my snips out I must have turned or something while I pulled them out and dropped them. For about 5 minutes I was tweaking out trying to find them and suddenly everyone was being sent onward to Andy’s just as I clipped my first branch. Time to pack my stuff up and move back on. Being aware of everything happening within my bubble was all that mattered. Within a few more minutes we’d really be kicking off this dangerous, twisted, challenging race. Was I ready? Absolutely. No thoughts, no worries, just doing whatever task they ask, and moving on to the next challenge one after the other. Like a robot. The Year of the Gambler had finally begun.