My last minute presence at the Winter Death Race was the result of social media networking’s ability to unite likeminded individuals. About a week out from the race I was considering driving up to Vermont from Chicago all by my lonesome…and then…it hit me, Facebook post! I simply put out a request asking if anyone was driving from the Midwest to the WDR and within minutes had a response that Michelle, Lee, and Eric who I met at the Ultimate Suck were driving up from central Illinois and they had room for one more. Just like that I had myself a ride to Pittsfield with a group of strangers who I had only met on maybe one or two occasions at other races. It never even crossed my mind that they were strangers until after the entire trip came to an end. I guess that’s part of why I love this community that has sprung up from these extreme endurance and obstacle race events, trust. It’s just there. 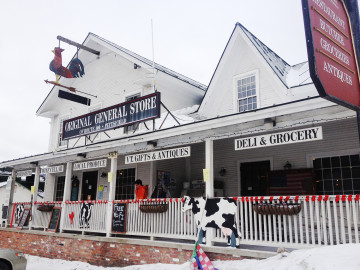 After a long 16 hour drive, which I found myself asleep for a majority of, we arrived in the wonderful small town of Pittsfield, VT. There is just something about this little mountain town that just draws me in every time I visit. I love it. We stayed above the General Store with some of the people who worked with Spartan Race and Peak Races. Whenever there is a race in town its like a big mixed-family reunion of sorts and I love it.

As many of you already know this trip to the Winter Death Race did not involve me racing and was primarily scheduled so I could provide coverage via the Obstacle Racing Magazine USA Facebook page and document the event for a story in the next issue of ORM. When I arrived all I wanted to do was help out in any way I could. I volunteered and helped a LOT of racers at the event. It was pretty hectic, but not once did I feel overwhelmed with all the responsibilities I decided to take on at the Winter Death Race. In a nutshell I was a reporter, photographer, volunteer, crew, and a cheerleader.

The most challenging part of photographing and reporting this event is trying to be in multiple places at once, there is a lot of action happening all around the farm and due to the nature of this type of endurance event people spread out fast. Thankfully the first 15 hours or so everyone was pretty much forced to work together which made that portion fairly easy to get some great photos and coverage. More challenging than trying to be in many places at once was the challenge of finding service. AT&T does not have very good coverage in the mountains of Pittsfield, VT. It’s awful, you might think you have two bars but you’ll just be draining your battery as you sit there trying to upload a photo to Facebook. This added another dimension to the challenge of providing coverage, but I did everything I could to get back to the General Store as often as possible. Often times I would stop in the store upload a photo and then hop in a car or run back down the road to catch up on the action. 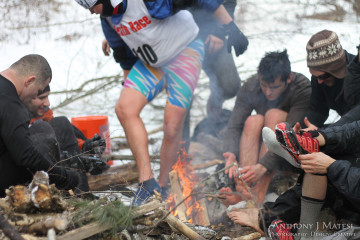 When all the racers began to drop during the river section of the race where racers were responsible for removing a 2600 lb. i-beam and then doing ten laps of crossing a three-rope bridge, performing 100 burpees, then crossing the river to receive a sharpie tick on their forehead for each lap completed.  It was frigid just being outside all bundled up. These racers were taking off their clothes and spending hours in the river. I was truly inspired by the courage the racers showed facing this demon. It was during this span of time where I found myself switching to a more helpful role. I brought a few racers back to prevent them from going full out hypothermic. When we would return to the greenhouse at Amee Farm, which was home base, the place was becoming packed with frozen bodies being warmed by family, friends, crew, and volunteers. It was insanity and yet even though there was so much chaos that even one racer was brought in and stripped down while being carried to a shelf with blanket and comforters, it all felt very manageable.

Just before the first  Legend of the Death Race Training Camp, I became certified as an Emergency Responder with CPR/First Aid training. While I didn’t follow the whole rule of asking racers what was wrong and if I could help, it was a given that any help was desired,  I did find it very rewarding to help so many people out, whether it was grabbing them socks, warm soup, putting heat packs in their shoes, whatever it was having the opportunity to help these racers who are putting so much on the line to finish a very dangerous race… it was something I can’t even describe. Helping people get through their suffering, its quite special, I know how much I appreciated all the help I received from Morgan’s parents this past summer who were complete strangers at the time. It’s nice to be able to give back to the same community where you’ve been helped.

The Race and The Racers

To make this simple I’m going to bullet point the tasks and highlights I remember fromt the race.

What these racers had to put up with out there was mind boggling even for me. Every time I watched someone strip down to their skivvies and slowly push their foot, followed by their legs into that ice cold lake.  I shivered for them. It  was very inspiring to watch the top racers push until their bodies wouldn’t let them anymore. It wasn’t because they wanted to quit, you could see it in their eyes, the desire, the defeat, the battle of wanting to continue but being medically inept for the sake of saving some toes, feet, and nerves. Even today racers are still talking about the tingling they have from neuropathy of the toes. Everyone who has seen doctors have been assured they will return to normal but as other racers have confirmed from past experience, it will take months. 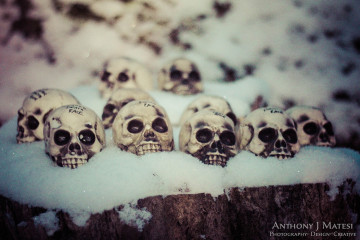 The amount of strength, courage, wit, physical and mental endurance, and damned stubbornness it takes to be a finisher blows anything I’ve seen in a movie and anything I’ve ever read in a book. It truly is remarkable to see everything from the other side. Even today I am still trying to process how great these athletes are that I find myself surrounded by. I love it.  The inspiration that drives each person, the different motives for finishing, and how training can prepare you for everything or nothing. And what’s even more impressive is the award for finishing is simply an inexpensive plastic skull. It’s what that skull symbolizes that makes it such a sacred treasure.  I can’t stress enough that even if you don’t race you have to witness what this race is all about.

The Winter Death Race may not be as long as the Summer Death Race and the challenges may not be as demanding in some ways, but what that cold does…it puts the WDR on a whole other level. One untethered to the simple paradigm of who is strongest, most mentally tough, and fastest. At the WDR your body’s ability to withstand extended exposure to the cold plays a larger role in determining who will make it into the actual race portion of all the chaos.

To hear the story from some of the racers themselves and other volunteers check out my post Winter Death Race Recaps. I’ll continue to add any new posts I find on the topic there.