Another weekend and another Reebok Spartan Race event in the books. This time to get my obstacle racing fix I flew out to Colorado, a state I’ve only driven through at night and seen from the the Denver Airport. After this weekend my love for this sport, the Spartan Race series, and everything that comes with it grew exponentially.

Spartan Race without question has one of the most incredible networks and community of individuals that become part of this huge extended family that works together to help everyone have an incredible experience.  The trip was one of a kind and I just want to thank everyone, Joe, Rich, Andi, Corinne, Tommy and everyone else who made it possible. Every event I attend I meet more people that I’ve only known through Facebook photos and messages. Those moments where you finally meet are sometimes awkward because let’s face it everyone looks a little different in real life. But once that moment is over it’s as if you just met your second cousin twice removed who is now part of this big group you call family. It’s pretty awesome.

Coming into this race I had expected that we would be hitting more mountainous terrain just because that’s all I could picture in my head when I thought COLORADO. I was a little off but there were some wicked hill climbs in Fort Carson. One thing that I was wondering about leading up to the race was how bad my lungs would handle the elevation. Saturday I definitely felt the effect more than I did when I raced again on Sunday. Every so often I had to put my arms up with my hands on the back of my head to help open the airways. It was also a lot warmer out on Saturday. Sunday ended up being a very cold, windy, hypothermia inducing kind of day.

This was another Spartan Sprint so the distance was the usual 4.5 miles, unlike Todd’s longer 5.2 miles the previous weekend in Indiana. Yoda, as they call him, designed this course and an excellent job he did.  In what was one of the most evil and obstacle heavy races to date I have to say that THIS is what I envision obstacle racing moving toward in terms of course design. Right out of the gate we were faced with a series of moats to jump. Saturday they were all pretty much equal in how wide they were. Sunday the first and fourth moat were made larger to force people into the muddy water, apparently a lot of people missed these moat jumps and they busted a lot of people up so to fix that SR increased the gap on the first and last moats, leaving the middle two a still conquerable distance to jump.

Right after the moats came the over under throughs with the nets and as soon as I finished them I was already feeling completely gassed on Saturday. Could this be the elevation kicking my ass I thought to myself? Again, Sunday wasn’t nearly as much of a problem for me. The rest of the course continued to be fairly obstacle heavy. There were two sections that were extremely obstacle heavy after around mile 2 you came toward the festival area again and had to do an Atlas Carry, Log Hop (should be called Stump Jump), one of the most interesting Barbwire Crawls (there were lots of obstacles to go around including some saggy low-hanging barb wire), then it was a gauntlet Spear throw, Traverse Wall, Slippery Wall, and then the Hercules Hoist. Not even 500 yards from there and you were right back into a strength gauntlet of obstacles, Tractor Pull on one side of the hill, then circled around to the other side to do the Sandbag Carry up and down the steep slope, then right back up that to the top where you had the Tire Flip. After the tire flip it was a short jog before coming up on the Ruck Sack which was 120lbs for Men and 60lbs for Women (a little ridiculous the weight differences if you ask me) and then it opened up and there was finally a half mile of running after a quick wall jump. Then just before the end of the race came a series of rolling mud pits, rope climb, cargo net crossing and of course as always the Fire Jump followed by the Gladiators.

The Indiana Spartan was pretty obstacle heavy and extremely challenging, I feel like even though there were different Race Directors this race built on that course design and philosophy of being more obstacle frequent and heavy and less about running and took it to the next level. In Indiana there were a lot of obstacles but there were not spaced out as consistently as Colorado. I think what made the Colorado Sprint great is that you almost never had a chance to really hit your stride, giving a lot of us non-runners an advantage we normally do not have, especially in the longer distances. The course was challenging to the point that within the first 10 minutes I questioned myself why the hell I was doing this race but when I crossed the finish line I knew exactly why. They don’t use that tagline for nothin’! It’s completely true and no matter how many Spartan Races I do it still holds true. You’ll Know at the Finish Line. Once again I knew, this IS my sport, this IS my life, and I love it. 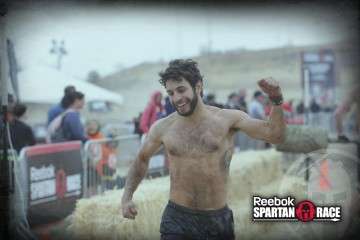 Both days left me feeling that sense of accomplishment when I finished and though both days were on the same course they each offered a different experience. Saturday was a challenge adjusting to the elevation and just discovering what the course was like. The second day was cold, windy, and once you got wet pretty miserable. That cold gave me just the boost I needed however to finish 4 minutes faster than the previous day even though I had more burpees (which I’m still not able to do perfectly…getting there). I finished 11th place on Sunday during the Elite Heat. That’s my best finish to date. Let’s break the top 10!

The most rewarding experience of the entire weekend was hands down my decision to Rabbit the Kids Race. It was my first time rabbiting a kids race and I just couldn’t believe how much fun it was. Those lil munchkins and some of those young pre-teens are wicked fast. I was running out of breath trying to stay in the lead fast!

While running the race with a bunch of kids chasing after you like a riot was a total blast it was handing out the medals to them as they crossed the finish line that really got me all pumped up and excited about doing the kids race. Seeing their bright smiling faces as the succeeded in becoming a Spartan and being able to place the orange ribbon around their little heads while telling them, “Congratulations Spartan.” it was a moment of complete understanding and realization of how much bigger this entire sport is going to be years from now. These little young-ins are being brought up with something exciting and fun to do that helps them live a healthy and happy lifestyle. They are being encouraged to go out and play in the mud, to have fun, and it’s so great to see. Maybe one day I’ll have my own little Spartans. Who knows… but going forward you can be sure to find me rabbiting and hanging out with the Jr. Spartans. As Don Devaney always says, “Aspire to Inspire.”

The race festivals continue to improve and become more and more inviting for EVERYONE to hang out in and enjoy a beer, food options could still improve – I don’t understand why more Food Trucks are not being invited out to these races – the free beer now included choice of beer which was a very welcome change. I also enjoyed getting into some of the Festival Challenges, slosh pipe is not one I can do yet but the number of consecutive pull-ups I can do has significantly jumped, I should be able to win that one again soon enough. Overall the Festival experience continues to improve, the only dissappointment I had was that they ran out of the Colorado shirts but thanks to Andi I secured one of the old shirts for my collection, thanks Andi!

Now about the FREE photography we receive. Since the new system has been put in place I’ve tried to give it a chance. The pics I got from Vegas were okay but when I downloaded hi-res they were just the unedited photo and not the “enhanced” images with the Reebok Spartan Race logo. They got a few shots of me but most of them were of others. Then the same thing with Indiana only a couple shots were actually of me. Now again the same thing with Colorado, two days of racing and really I have maybe 3 images I like and would use. Thats not too bad really but what is frustrating is the fact the images from all these races have been basically the same thing, Barbwire Crawl, and/or Gladiators/Fire Jump. It’s as if these have become the default obstacles for the photographers to capture and it’s pretty lame. There are so many more moments I would like to see captured. I remember we (the Spartan Racers) used to have to spend an hour or two going through Lost and Found and various obstacle catalogs of photos but at least you had variety and usually found anywhere from 5-10 photos. Now you are lucky if you get anything over 2 and after three races the only reason I can distinguish them apart is because of what I was wearing. So if anyone out there is listening…please start taking photos of the other obstacles, pretty please?

Below is a video from the Sunday Elite heat. Thanks for posting this Corinne 🙂

Next up: Spartan Sprint Texas. It’s time to get packing.