Making my way up to the top of Tweed River Drive, I was surprised not to see anyone ahead of me and looking back, no one behind me. I was all alone. The solitude felt strange. The sun beat down hard as I charged up the same path I remembered taking the year before, when Morgan and I headed toward one of the last challenges. Just like that time, I felt the sun’s punishing rays rapidly increasing my body temperature.

The reality of being alone and still wandering up the road after Anthony passed by on the bike left me feeling a bit edgy. By now, I expected at least one person to catch me. Uphill climbing isn’t exactly my specialty. I continued to climb until finally I reached the last stretch just before the cabin where Chris Davis had once stayed came into sight. I could see a table where Peter Borden sat waiting for his next victims. This was the year of the Gambler and I was about to play my first real hand at his sadistic card game, literally. 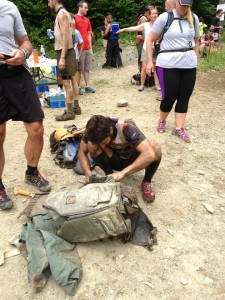 Finally, I saw some racers already playing the game,  so I took a minute to observe how everything was playing out; all the while being greeted by some of my Corn Fed Spartan family members. They came here to observe this particular obstacle since it was one that everyone had been murmuring about since people started arriving in Pittsfield. Admittedly, it was a pretty gnarly obstacle designed to physically and mentally break a person. At the top, was a ravine and a drain culvert was constantly dumping water into the ravine. The ravine itself was wonderfully decorated with strands of barbed wire hanging loosely from the roots and a few stakes here and there. At a typical obstacle or Spartan Race you’ll see a saggy barbed wire section every now and then, but this…this was unlike any barbed wire section imaginable.

Some sections required making a choice between crawling over or under a log—the key factor being how easily one might navigate their pack across the obstacle. At the top of this crazy barbed wire section was a fold-out card table. There, Peter Borden, another Death Race mastermind and race director, was challenging each racer returning from their dance with the barbed wire to a little card battle. High or low? Choosing a low card meant you went back for another round of barbed wire navigation. Choosing a high card resulted in moving on to the next card. But let’s be real here, who’s kidding who? This is the Death Race. Much like life, it’s not designed to be fair and I could see that was the case at the present. From what I could tell, you retrieved your card from the bottom of the crawl and played it at the top.

Observing this obstacle, I took my time to get myself “comfortable” for the first time I took off the tactical pants I wore and stripped down to my compression shorts. The heat was a major factor and I knew this obstacle would leave me soaking wet. We were to take our bags with us through the challenge so I unloaded most of my contents in the safest location I could find behind the little shack. Closing my pack, I took a gamble.—leaving  my gear unattended. In addition to unloading my gear, I took advantage and refueled with some Gatorade and snacks. Once I was ready, I notified Peter Borden that I was ready to gamble. He sent me to the barbed wire section with my recently-lightened pack, to the bottom of the ravine where I was greeted by volunteers before receiving a card. Once I received my card, I was to return to the top of the ravine to play my card against Peter’s. Let the gamble begin. 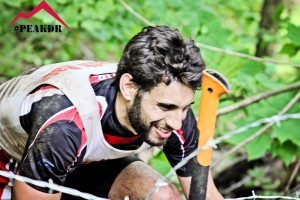 I grabbed my pack and began my dance with the barbed wire. This barbed wire crawl was unlike anything I had ever experienced, which had nothing to do with slinging my ruck along with me. I was no stranger to bringing a ruck through a crawl, I’ve simulated this at many obstacle course races by dragging my ruck along for the ride. What made this barbed wire crawl so dire was the very element of its design. It snaked through a treacherous ravine that most wouldn’t even consider trying to navigate without the manmade string of thorns. But I couldn’t help but think,here, climb up and down this slippery slope of death…and wait, let us throw in a bunch of loose, low hanging barbed wire in the mix to give it that added touch of “you may die” that sounds like a great obstacle.  And the sick part is, I really enjoyed this challenge, a lot. 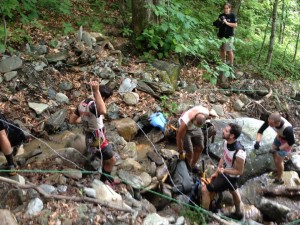 As I started crawling my way down I realized how advantageous my natural flexibility would be a factor in this obstacle. On the descent, I started to get an idea of how many of us were already here. There were only maybe six or seven of us when I started. Crawling down the ravine really brought out all the natural movements I have come to perform naturally (thanks to the many years of martial arts, to my years in gymnastics and my collegiate cheerleading continued to strengthen and maintain my flexibility).. I moved through the barbed wire with incredible ease, like one of those spies sneaking into a heavily laser-guarded museum, moving under each wire and even picking them up when need be with zero hesitation. My speed to the bottom proved to be noteworthy. At the bottom, I was surprised to see the volunteers were two young children. They gave me the opportunity to select a card and as I turned it around to view it I was not happy to see it was the two of hearts. Knowing that the high card wins, I was ready for my punishment before I even began my climb. Figuring there was no point wasting time, I hurried myself back to the top trying not to catch my ruck or my body on any of the wire. From that point forward, I was on a mission to regain my leading position in the race. I couldn’t turn off my competitive edge. 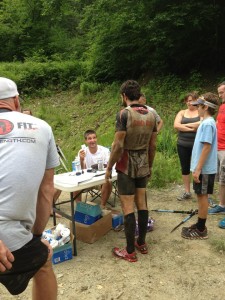 Approaching the card table, I sarcastically threw my card down and told Peter Borden, “beat that” and laughed almost maniacally. He laughed and said, “Looks like you have another lap” as he pulled out an Ace from his deck. If, for some reason, you got lucky and did win you’d instantaneously move to the next challenge. Since that was a very unlikely outcome the other option to move on to the next challenge was to complete five laps of this barbed wire crawl challenge. There was a least some sign of relief though, after three laps with the ruck you were allowed to finish the last two laps without it.

Knowing that this was the Death Race and with almost 100% certainty that the game was completely skewed in the House’s favor, much like a casino except with even worse odds, my strategy was to barrel through the barbed wire crawl with as much speed as possible. Finishing this obstacle with the fastest, that was my goal. As soon as I could drop the bag I knew I could fly through this course. I knew that was how I’d catch up and pass my competition. My energy levels surged through the roof at this stage. I can’t really explain it other than feeling empowered. Maybe it was the young boy cheering me on, or the support of my fellow Corn Fed Spartans, or Andy telling me during one of my laps that I could win this thing, or the fact I was actually gaining on the leaders and was ahead of previous winner Olof Dallner and female winner Amelia Boone but I felt powerful. 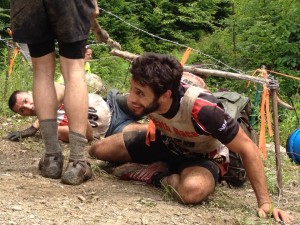 This race seemed ruthless, yet in a sick and twisted way, it also felt ridiculously easy to me. Up until now, nothing really demanded too much of me and we had to be a good 30 or so hours into the event. The moment I was free from having to lug that bag up and down was the moment that obstacle was over. I knew I wasn’t going to win a single one of these rounds of cards so I just moved as swiftly and quickly as possible. Sliding my body over an enormous tree root while staying low enough to avoid getting snagged, aping my way down the rocks, and bear crawling with unbelievable ease I completed those last two laps so vivaciously.

When I finished I even celebrated with a Burpee backflip or two for the camera. That’s right, after nearly 30 something hours moving up and down that mountain, chopping wood, moving rocks, running, and hiking and navigating this perilous barbwire course I was still able to show-off with my favorite variation of the Burpee. I have to admit, I wasn’t sure what would happen when I went to throw that backflip but I had so much power, stamina, and vigor that I wasn’t worried. I knew my muscles would activate and I let them take over. It was with great surprise I landed, but of course I didn’t show it; no, I nailed that Burpee backflip. Pure ownage!. This was my race. Get off the tracks or be destroyed by the freight train because I am unstoppable!