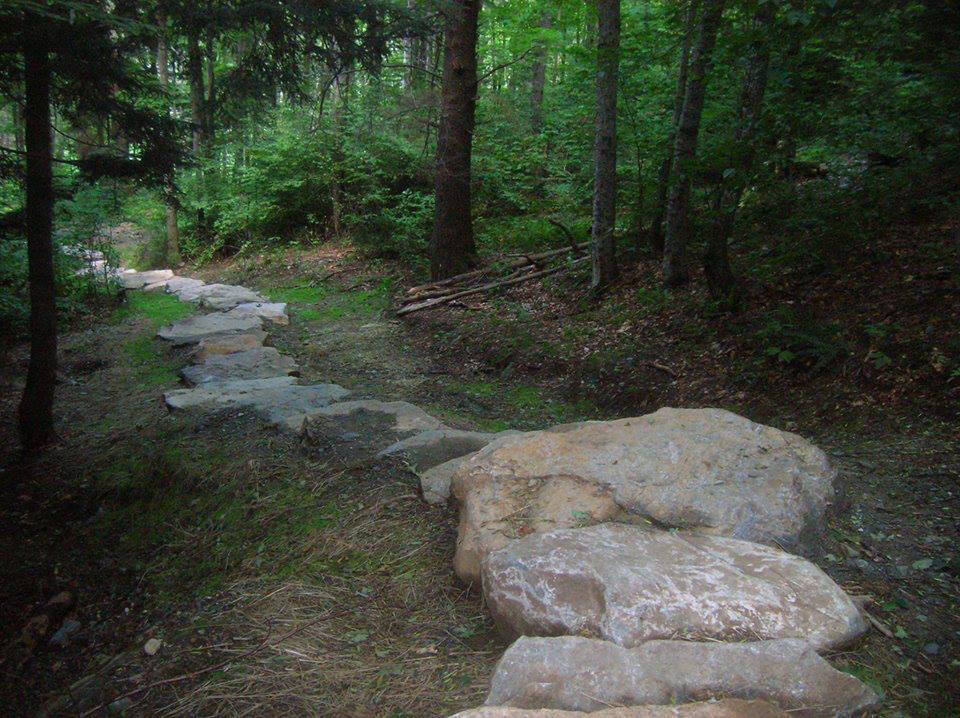 The first night we were on Joe’s mountain we didn’t finish working on the staircase until something like 3AM. The entire time, we worked tirelessly building those stairs. It was evident that some teams were clearly expending more energy and putting forth more effort in making a respectable staircase compared to other teams. My team, Team 1, was absolutely killing it. Our staircase was among the best with each step perfectly placed, filled in, and properly fitted with the chosen stone. In terms of weight, we moved anywhere from 300 to 3000-pound stones, each one requiring precise lifting and positioning before sliding it into place. The most impressive of stone steps that we placed had to be the one that Don Devaney claimed to be comparable to the weight of a Ford F-150 — in other words, It was enormous! To make this happen, we needed ti recruit help from other teams, coordinating how to lift the stone, and make that stone slide into place in addition to stopping it without endangering anyone’s life. Accomplishing such a feat required us to lay out multiple pipes that ended right where the stone needed to be set in place. Then, three or more people began prying the stone up from the ground with more pipes and a second group that had more pipes angled at the bottom as fail-safe, to stop a slipping rock just incase it locked into place further than we wanted. Naturally, there were naysayers, a lot of them, when we tried to coordinate this. I took the lead and directed everyone to successfully maintain sense of direction and order. Since we had already moved many stones of similar, we had a working system to accomplish this task. As soon as a stone was lifted and placed on the pipes, it started sliding fast and the second it hit the soil it came to an abrupt stop. What seemed like a disaster waiting to happen (especially for those watching) became the most successful and amazing moment of the staircase construction process. Success — it felt so good, especially after having so many other racers tell us we were nuts and that this would never work. We succeeded and with that, we connected one of the last sections of the staircase that needed to be filled in.

All this time there was only a few things on my mind:

3. Don’t push yourself to hard.

4. Keep your nutrition and hydration solid while it’s still manageable.

5. I wish Corinne was here.

During this whole process, while we busted our asses on those stairs, I started hearing from people that we might be getting food for doing so well. This struck me as very concerning and shocking at first. Why would they give us food?Is this a gamble? Are we being tricked? And what was up with them providing everyone with ZICO. I thought this race was self-supported. Something was fishy; it just didn’t add up. They were helping us and being nice to us. Then it hit me. We were going to be on that mountain until those stairs were finished. How can they make sure these stairs get finished as fast as they want them done…provide the racers with unconventional comfort that will motivate them. Very interesting tactic, Joe and Andy, well-played. The chicken coleslaw and bread was delicious. I feasted, then went back to work. Feeding the racers worked very well, very few people dropped those first 18-24 hours and the stairs…they look magnificent (you should really get to Pittsfield, VT and check them out). Those stairs will only get better with age. Once we had done as much as we could on the staircase one team at a time we were sent to the top of Joe’s Mountain. Atop the mountain the directive called for headlamps off and to find a place to sit or lay down. I sat there with Michelle Lomelino and Lee Biga, impatient and aching for this race to begin already. There we were, laying under one of the largest moons you could ever see — shining through some clouds with an ominous hue. The view of the nighttime sky at the top of Joe’s mountain is incredible. It’s one thing I stare at in awe every chance I get when I’m in these mountains. Joe’s Mountain top has come a long way since last time I was up there. The cabin is now covered with the most amazing stones that have been laid by the athletes training and living in the cabin. There is an incredible stone fire pit that was made earlier this summer by my friend, Michael Aspinall, whom I stayed with for the Indiana Spartan Race. He did a damn fine job of constructing this fire pit. Given that there was no seating, I knew at least one thing we’d be doing after nap time.

All at once everyone instructed to get up, headlamps on, and begin doing some good old fashioned landscaping. We had to bust out our snips and saws and whatever other useful tools we brought for cutting down some brush and such. Some racers were instructed to move logs and stones to create a seating area for that badass hand-built stone fire pit. Seriously though, it’s what I envision when I think of building one, but with probably a much different outcome. I was instructed to do some hedging, so I used my saw and began tearing through all the tall grass, weeds, and whatever else we were gutting through. Joe kept reminding us that there was a wedding later in the day and that was why he needed the stairs and landscaping completed ASAP. I never saw a wedding. Finally, there was one particularly large stone at the top of the mountain that everyone was trying to move. Literally almost everyone was on it. I could tell from the distance (and basic physics) that the ropes might snap any minute. That stone just wasn’t moving. As I began to walk up, they summoned all hands on deck. Snap. The rope snapped just as I approached. Back to cutting down brush and staying away from the race directors to avoid risking being caught doing nothing. It’s better to do something than nothing. As I hacked away, Don called me over and told me to take my hay and seed and bring it down the mountain to Andy. He told me how long it took him to get from the top the bottom and I was sent on my way trying to go as fast as possible. I grabbed my compression sack filled with wet hay, the easiest way to get 5 pounds without requiring an extra large garbage bag to carry all the hay stalks it would take to make 5 pounds dry. I was one of the first few sent off on this task, and I took off at full speed.

I had it all at that moment. I wanted to push myself to compete with everything I had. No limits. No torn shoulders. No excuses. I felt great and with that newly-risen sun, I was feeling alive. This was it, this was my time! I had been training for this since last year. Even when I was stuck in my parent’s house with one arm stuck to my side, I was preparing for the Death Race. My mind knew what it had to do. The rest was just systematic. My body is programmed to do what my mind tells it to do. Whoosh. Full speed down the mountain. I knew, this race is about to begin.