Once we had removed our bodies the frigid waters, we were sent back to school. We had one last game to play before we sat down for “class time”. Once we gathered in the backyard, we were pitted against one another in an all-out race on our hands and knees. Without putting too much thought into it, I think I remained somewhere in the middle, though I may have pushed it a little hard at times. Thankfully, I didn’t take it as far as some did; a few racers went so far as to tear the flesh off their knees, the tops of their feet and in some cases, the skin off their shins, too. It looked awfully painful. I only had a few scrapes here and there, but nothing too bothersome. 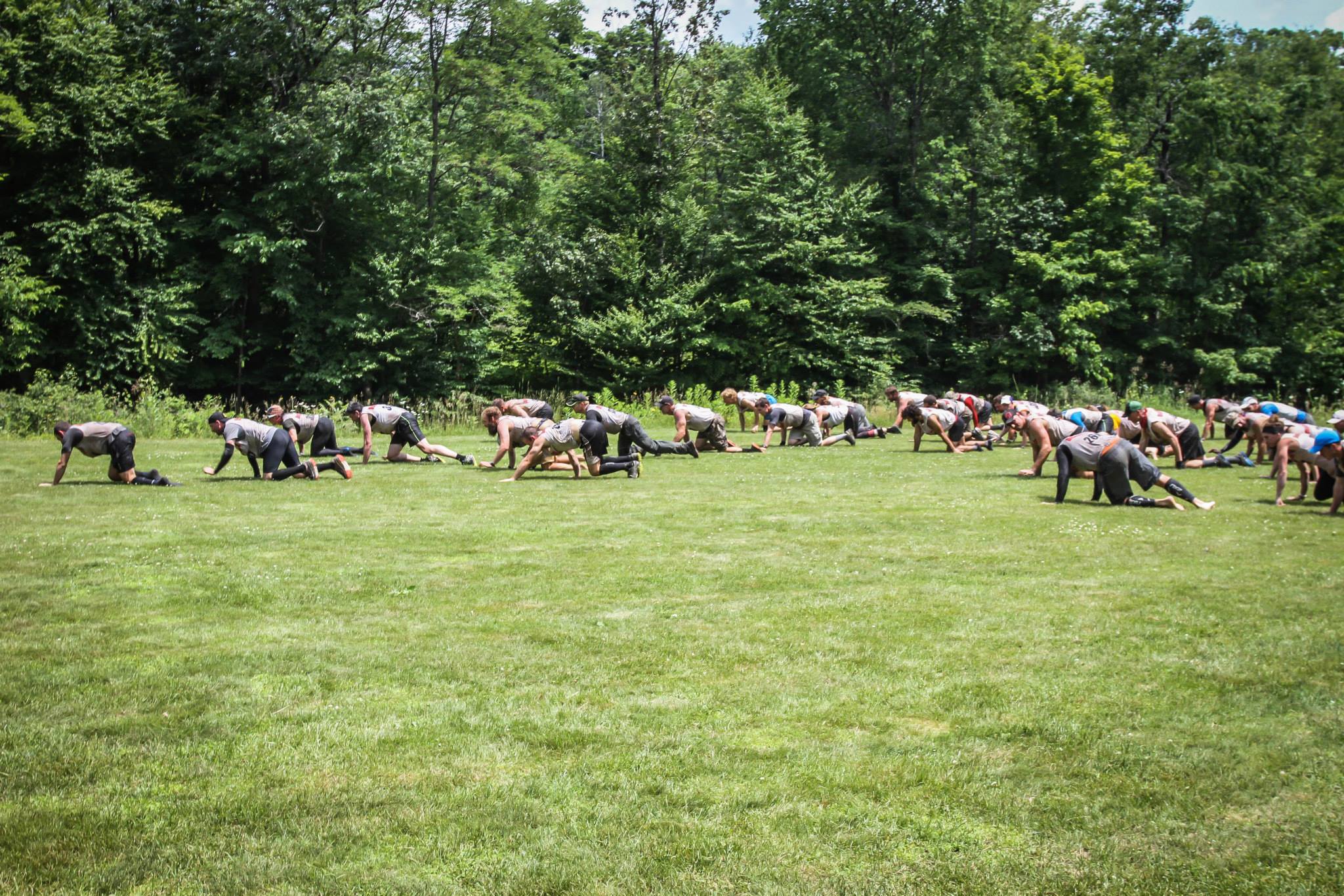 After our short little NASCAR-style baby crawling race, we came together in the Borden’s backyard. Sitting in our circle, we were taught a song complete with hand gestures and everything. It was as though we were back in preschool.

It went a little something like this, “I’m alive, alert, and enthusiastic” and we had to sing it and gesture to it, over and over. The whole experience was ironic as most of us were barely classifiable as “alive” and most of us were not “alert” nor were we at all “enthusiastic”. At that moment, the word enthusiastic was… well, it’s an interesting description, considering how the Death Racers felt in this moment. Most of the racers, were far from enthusiastic with sleep deprivation factoring in and some Death Racers may have been “enthusiastic” from the very same sleep deprivation, “slap-happy,” is the technical term. Sleep deprivation can be like a wild card, you just never know what version of yourself you’ll get. 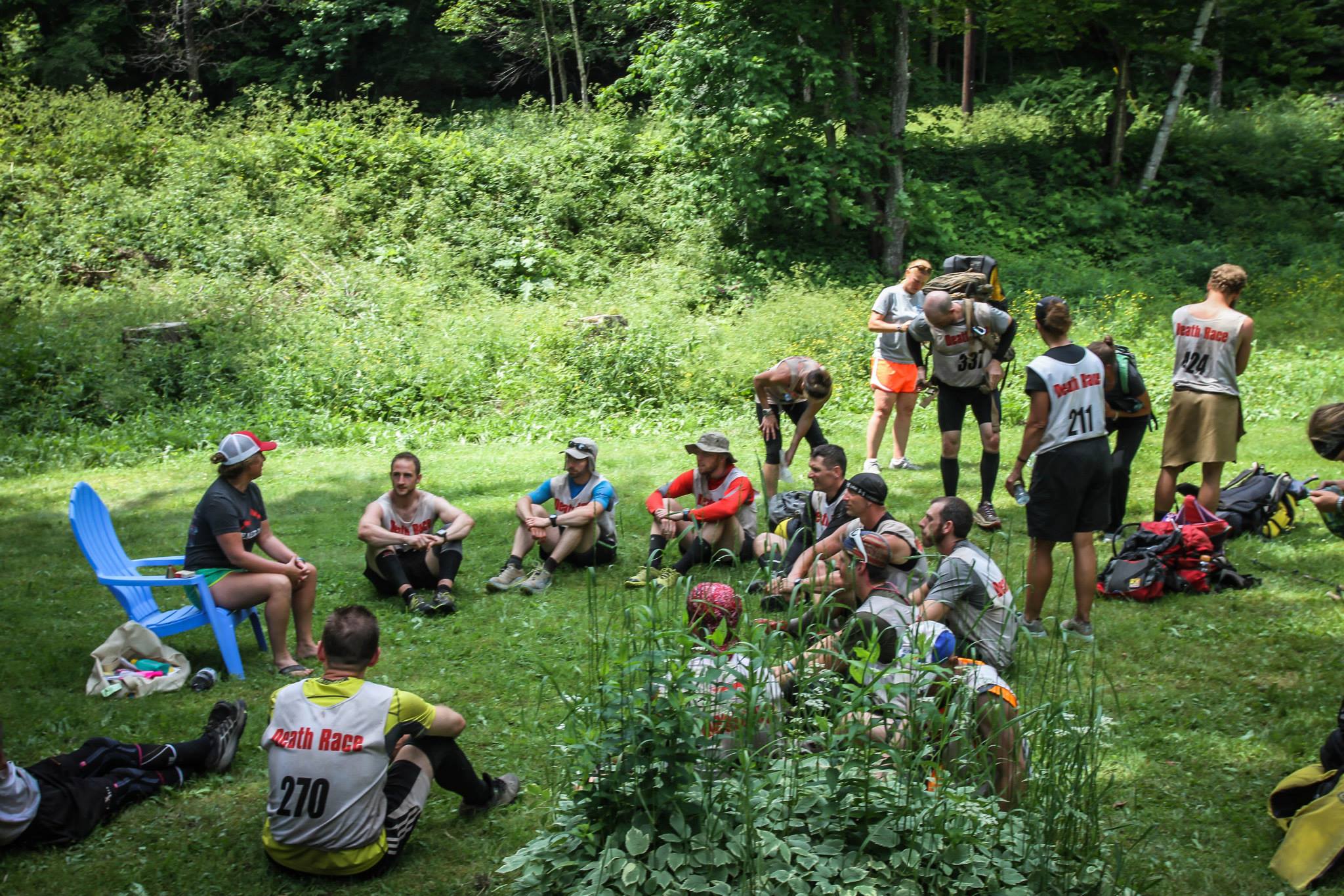 Once the “alive, alert, enthusiastic” game came to its highly-appreciated end, we ‘graduated’ and were instructed to get our gear and belongings before being sent back out into the wild for our next challenge. All the while, I couldn’t help but think we were just killing time, waiting for this other bus to make its trip to New York and back. That’s a five-hour drive minimum. And who knows how long they would be down there. It still seemed unbelievable that they’d divide our experience so dramatically but then again, this was the Death Race, where literally anything can happen.

For our next task, we were to enter the river where we had dunked ourselves shoulders deep earlier and trudge up the river to the home of the person who is always behind the lens at every Peak Races event, Marion Abrams. Our mission was to provide her with some good ol’ fashion Death Race “volunteer” community service outreach in the form of manual labor. In all seriousness, this is one of my favorite aspects of this race. I love giving back to the communities that play host to these chaotic events that me and my “hood rat” friends love to participate. And that’s exactly what we would be doing. With our efforts at Marion’s residence, we have helped protect her home from a river known to rise.

Over the next few hours, we were gathering boulders out of the water and orchestrating a production rhythm as we collectively alternated between gathering and stacking. Together we utilized good ol’ fashion man (and woman) power to manufacture a retaining wall to act as a blockade the next time the river rises. The most challenging part of this task was trying not to twist an ankle on any of the slippery river bed.

Once we completed the task – a victory for us – we were gathered by Johnny Waite and given five minutes to eat, drink and go to the bathroom, quite challenging when you’ve got to do all three. Once we finished taking care of all our “input” and “output” needs we were instructed to gather our packs and to rest for 20 minutes without moving. We could set ourselves up however we wanted, we just couldn’t move once we got into position. I chose to partially lay down with my body propped up.

Now you might be thinking this doesn’t sound so bad for a Death Race, you get to rest for 20 minutes, but remember…

We were well beyond the 50-hour mark at this point of the race. Lay down, and don’t sleep. What a sick and twisted way to provide us something very relaxing and nice after all the misery we had suffered up until this point. Sometimes you wonder if the Race Directors were trying to aid us in our journey, there had been a few beneficial tasks over the past few hours.

First, laying in the river gave our bodies a much needed “ice bath” and now laying down to rest our bodies, giving us a chance to meditate, but if we fell asleep, who knows what could happen. They had already started cutting racers from the event, five at a time.

Would they cut us if we fell off into a dreamland far and away from the challenges we’ve overcome up to this very point. Could something as simple as falling asleep be the end of another Death Race journey?

I hoped not, my eyes felt heavy.

As I lay there, staring up at the sky, I thought, this was going to be the most trying challenge yet, to lie here wide-eyed, unflinching, thinking, I’m alive, alert, and hopefully once we got back up, still enthusiastic.

Ha. There it is, again. I must be. If I’m not, finishing will be impossible.

Then, I remembered the importance of smiling, of being thankful for what I’d accomplished, and suddenly I felt this heightened sense of how alive I was in that moment. This feeling of being more alive, which I discovered in this meditative state made it possible to instantly appreciate everything in the here and now, who I am, who I was, and who I was becoming.

This is what it means to be present, and aware. In that moment, I found my happy.

Don’t fall asleep..don’t..fall..don’t fall…asleep… I could feel myself starting to drift away. I couldn’t let this happen again, I had already fallen asleep on the bus when we weren’t supposed to, nothing happened then but that moment has no attachment to this moment, if they want to punish us for falling asleep, they can and will. I fought back and blinked my eyes feverously.

He softly spoke something along the lines of, “Okay everyone, in a minute I’m going to tell all of you to get up, those of you that can hear me, get up quietly, and do not let the others hear you. Gather your belongings and head back upstream.”

And that was it. We slowly got our packs back on and started to make our way back into the river. Others were completely passed out, and not a clue that we were evacuating the area. It didn’t take long for them to snap out of their slumber, but it was already too late. They would be far enough behind to be in the danger zone, and just as expected, we heard the announcement, “the last five back to Borden’s are out.” The speed of movement increased all around me, I tried to keep my balance as I hustled from one slippery rock to the next. This was dangerous. One mistake and I could snap an ankle, I thought. 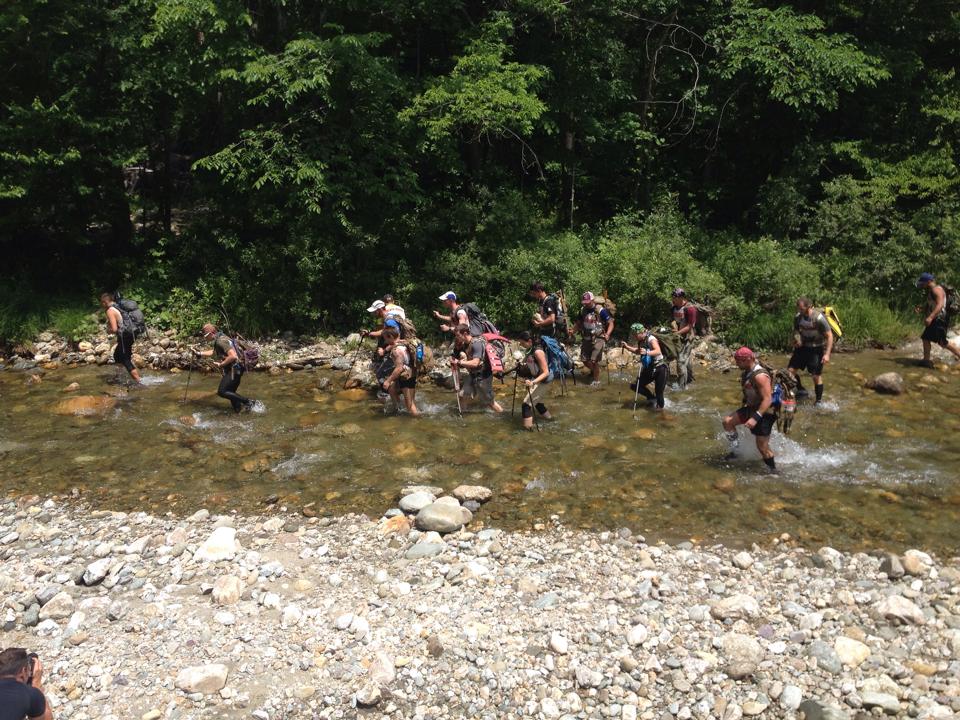 When I emerged from the river and returned to Borden’s backyard, I sat down to await our next set of instructions. I felt a massive relief come over me as I had once again, managed to maintain my position and was not on the chopping block. Five more were sent off the island. Just like that. It was unbelievable to me, I was starting to wonder if I had picked the wrong bus, the other guys and gals probably only just got to New York a couple hours ago and here we’ve been busting our asses for hours. What else could be in store?

We were about to find out.

Log Rolls. It was log rolls. Mother-fuckin’ log rolls. It was the 2012 Death Race all over again. I was going to wind up puking my guts out all over the place, I thought. Wonderful. I didn’t care, nothing would stop me from finishing this Death Race.

I got down and I rolled, thankfully, all we had to do was log roll all around the entire yard. I was thankful that this log rolling experience wasn’t anywhere near as long nor as vomit-inducing as the Year of Betrayal. Once we finished rolling, we sat with our packs, until we were instructed to make haste for Riverside, once again the last five would be taken out of the race. It was every man for himself. With full rucks on our backs, we sprinted up the driveway and out onto VT-100 and over to the White Barn where it all began some 56 or so hours ago.