So it ended up being just me, myself, and my rucksack today. Turns out some people were still sleeping or hungover this morning. So I got to Busse Woods and headed out around 9:45am this morning. I packed my slightly smaller rock today, I think it’s around 40lbs or so I’ll have weigh it one of these days.

Anyway so when I arrived I got myself all geared up and started out with a slow jog towards what normally is a small lake, with all the wonderful snow we got this week it looked beautiful. I noticed there were multiple sets of tracks going across the frozen snow covered lake both human and animal. I checked before I actually set out across the lake but it was safe so I continued and made my way into the woods. The first mile or so I ended up just going around in a circle, and ended up kind of where I started so I picked a drastically different direction to head out in. The entire time I was out there it was just exhilarating, so many fallen trees to climb over and crawl under, I just love being out in the wilderness. I saw a few packs of deer while I was out, but I was very far away from them.

At the one hour mark I found a nice large fallen tree that was just the right height to do some burpees to “box” jumps (obviously the box being the fallen tree). It was really neat because at this point I had been following this path which looked like it had been paved out by skis, and sure enough while I was knocking out 50 of these a very cute older couple came by as they were cross country skiing. They stopped and chatted with me, it was fun exchanging a few quick stories about how they were training for a 100km cross country skiing event and of course I told them about the Death Race. They asked me why I was putting myself through such madness, the only easy explanation I could come up with mid-burpee was, “to test my limits.” We wished each other well and went back out on our way. 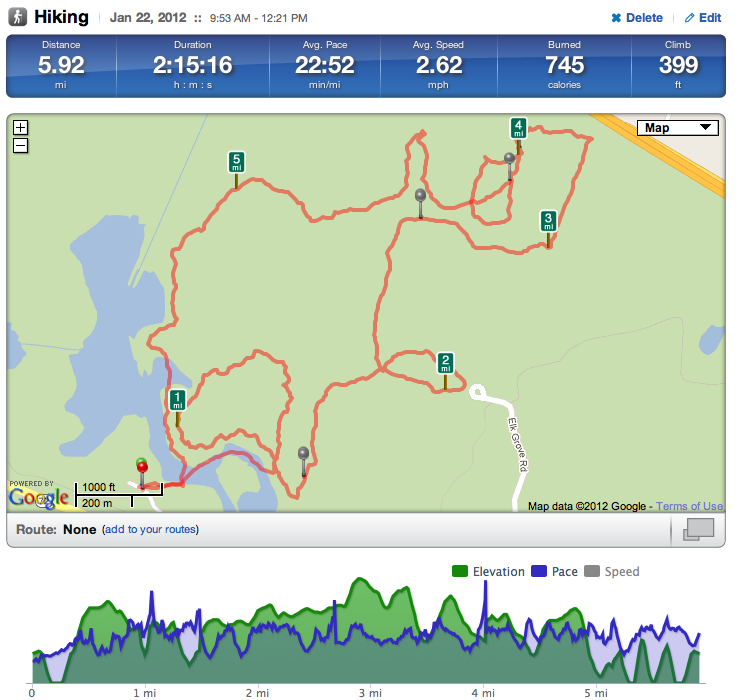 Around 4 miles into the workout I came out on to a road path and took that downhill and back up to find myself near one of the highways. I was beginning to get slightly exhausted, it was around 1.5 hrs so far. That’s when I decided it was time to start heading back toward my car. Well that didn’t work exactly as easily as I thought it would because now I was all kinds of turned around. I went in a circle over about a half mile before I pulled my phone out to check the RunKeeper map to see how far off I was from my destination. I was only about a mile out if I would just head west a bit. It didn’t take too long to get back but it felt like it was taking longer than it was. My body temperature was starting to drop and I was developing an appetite for sure. I found the lake and followed it until I was close enough to where I originally crossed. Finally, my journey was complete. I did some quick stretches and devoured the Balance protein bar I brought with me.

I will be posting the location for next Sunday’s expedition. We’ll be going to the Palos Forest Preserve in Willow Springs. I’ll post details and a map of where to meet tomorrow. How did your training go this weekend?